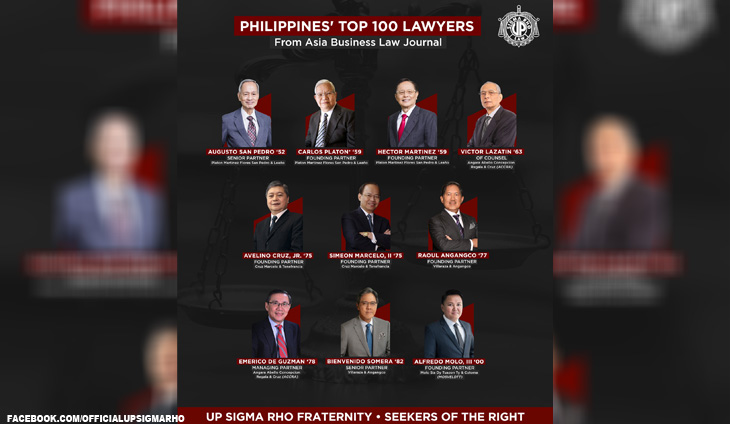 Ten of the Philippines’ Top 100 Lawyers in 2021 are alumni of the Sigma Rho Fraternity, continuing its four-year streak of being the most represented fraternity in the prestigious annual list by Asia Business Law Journal.

The University of the Philippines (UP) College of Law-based fraternity pointed out that it has “consistently been the fraternity with the biggest number of Brods to earn the recognition.”

The so-called A-List is compiled every year by one of the region’s leading law magazines based on “extensive research conducted and nominations received from in-house counsel based in the country and elsewhere, as well as Philippine-focused partners at international law firms based outside the jurisdiction.”

An Ateneo de Manila University (ADMU) fraternity, the Fraternal Order of Utopia, ranks a distant second behind Sigma Rho, with five alumni in the list.

UP Portia Sorority is the sorority with the biggest number of sisters in the A-List.

“Thank you, LPs and sisses, for being consistent models of honor and excellence in the legal profession,” Portia said in a Facebook post.

The UP-based Alpha Phi Beta and Alpha Sigma Fraternities have two alumni each make it to the A-List.

A member of San Beda Beta Sigma Fraternity who ended up graduating in UP College of Law, Arturo del Rosario, Jr. (Del Rosario & Del Rosario), also makes it to the list. #