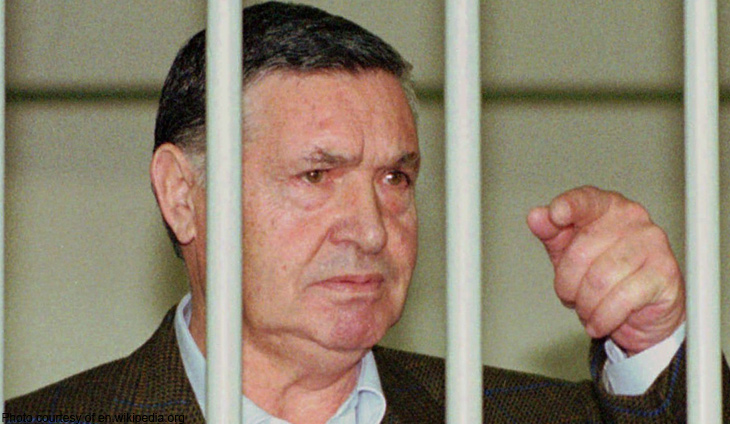 Former “boss of bosses” Toto Riina, one of the most feared Godfathers in the history of the Sicilian Mafia, died early Friday after battling cancer, the government said.

Riina, who had been serving 26 life sentences and is thought to have ordered more than 150 murders, had been in a medically-induced coma after his health deteriorated following two operations.

The mobster, who turned 87 on Thursday, died in the prisoners’ wing of a hospital in Parma in northern Italy just before 4:00 am (0300 GMT).

Nicknamed “The Beast” because of his cruelty, Salvatore “Toto” Riina led a reign of terror for decades after taking control of the island’s powerful organised crime group Cosa Nostra in the 1970s.

The most high-profile murders he ordered were those in 1992 of anti-mafia judges Giovanni Falcone and Paolo Borsellino, who had worked to bring more than 300 mobsters to trial in 1987.

“With his strategy of bloody massacres in Sicily and across Italy… he turned an invisible Mafia visible, with hundreds, thousands of murders, carried out first with Kalashnikovs, then bombs.”

But other anti-mafia experts warned that the demise of the ex-superboss did not mean the end of Cosa Nostra.

“We must not lower our guard,” Interior Minister Andrea Orlando said.

“Though it may be less noisy and bloody today, it is no less dangerous. The Mafia knows how to adapt,” he added.

Riina’s family had been given permission by Italy’s health ministry Thursday for a rare visit to say goodbye, though Italian media reported that neither his wife nor children had made it in time.

“You’re not Toto Riina to me, you’re just my dad. And I wish you happy birthday dad on this sad but important day, I love you,” one of his sons Salvatore wrote on Facebook.

Among his most famous crimes, Riina ordered the brutal murder of a 13-year old boy who was kidnapped in a bid to stop his father from spilling Mafia secrets. The boy was strangled and his body dissolved in acid.

“God have mercy on him, as we won’t,” an association for victims said of Riina in comments to the Fatto Quotidiano daily.

The Italian bishops conference ruled out a public church funeral for the mass murderer. Pope Francis declared all mafiosi “excommunicated” from the Catholic Church in 2015.

The ageing gangster had asked in July to be released from prison on the grounds of serious illness — a request that was denied after a court ruled the care he received behind bars was as good as he would get on the outside.

Doctors said at the time that the former boss was “lucid”. He was caught on a wiretap earlier this year saying he “regrets nothing… They’ll never break me, even if they give me 3,000 years” in jail.

The son of a poor farmer, he was born on November 16, 1930 in Corleone, a village near Palermo that would become synonymous with the Mafia through Francis Ford Coppola’s popular Godfather film trilogy.

He lost his father and a brother young when they were blown up trying to extract gunpowder from an unexploded American bomb in 1943. By the time he was 19, he had killed his first victim.

He started off as a foot soldier to boss Luciano Leggio before moving up through the ranks, going on the run in 1969 but continuing to lead first the Corleone clan then the entire Sicilian mob from hiding.

He would elude police efforts to snare him for almost a quarter of a century, without ever leaving Sicily.

Riina was slapped with multiple life sentences in absentia after a fellow mobster turned state witness.

The “Beast” retaliated by ordering the deaths of 11 of the turncoat’s relatives. He was eventually captured in 1993 after a tip-off from a rival.

Pietro Grasso, Italy’s senate speaker and a former anti-mafia magistrate, was among many to lament the fact that Riina took many secrets with him to the grave.

The mobster’s eldest daughter Maria Concetta mourned by posting a picture on Facebook of a finger pressed to the lips and the word “shhh…”, a likely reference to the Mafia code of ‘omerta’ — a vow of silence. (Agence France-Presse/AFP)