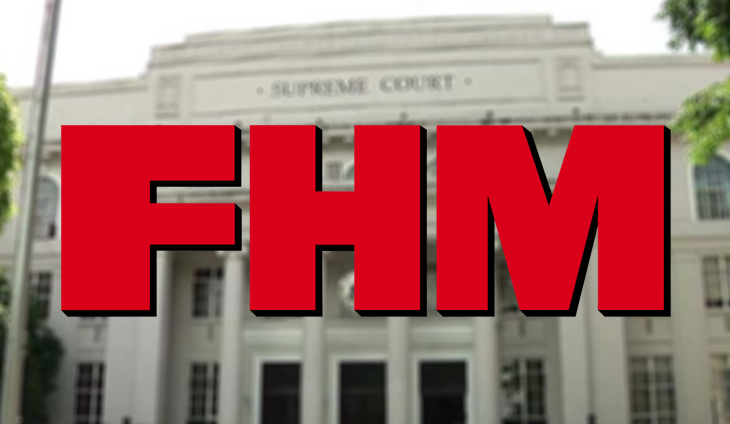 The Supreme Court has dismissed the petition filed by popular men’s magazine FHM which sought to declare as unconstitutional Manila’s Ordinance No. 7780 or the city’s anti-obscenity ordinance.

In a 9-4 ruling dated September 24, 2019 but was only released to media only on Wednesday, the justices appeared to have “opted to side with judicial restraint” as it ruled that “obscenity is not a protected speech.”

In 2008, group of pastors and preachers
filed a complaint against FHM and other publications, particularly tabloids, for violating Ordinance No. 7780. They were led by then Manila 6th District Representative and now House Minority Leader Bienvenido Abante, the principal author of the ordinance.

The group sued the publications for violating Articles 200 and 201 of the Revised Penal Code. But the Manila’s City Prosecutor Office dismissed the complaints except Article 201(3) which prospered and went to court.

FHM then ran to the SC to challenge the constitutionality of the city ordinance, alleging its “expansive” language violated their right to free speech and expression.

Penned by the now-retired associate justice Francis Jardeleza, the SC said Ordinance No. 7780 cannot be facially challenged for being overbroad because obscenity is a class of speech that is beyond the protection of the Constitution.

The SC also noted that the petition was moot already because Manila prosecutors didn’t push through with the case related to the ordinance.

“The present petition does not involve a free speech case; it stemmed, rather, from an obscenity prosecution,” the court said.

“As both this Court and the US Supreme Court have consistently held, obscenity is not protected speech. No court has recognized a fundamental right to create, sell, or distribute obscene material. Thus, a facial overbreadth challenge is improper as against an anti-obscenity statute.”

The majority justices said: “Until the proper case presents itself, prudence dictates that the Court should exercise judicial restraint.”

For his part, Associate Justice Marvic Leonen lamented that the high court should have resolved the legality of the ordinance head on inasmuch as a similar case may present itself in the future.

“The dismissal of the criminal cases against petitioners does not mean that no other person will be penalized under the Ordinance. Its constitutionality, therefore, is an issue that is precisely ‘capabale of repetition, yet evading review’,” said Leonen.