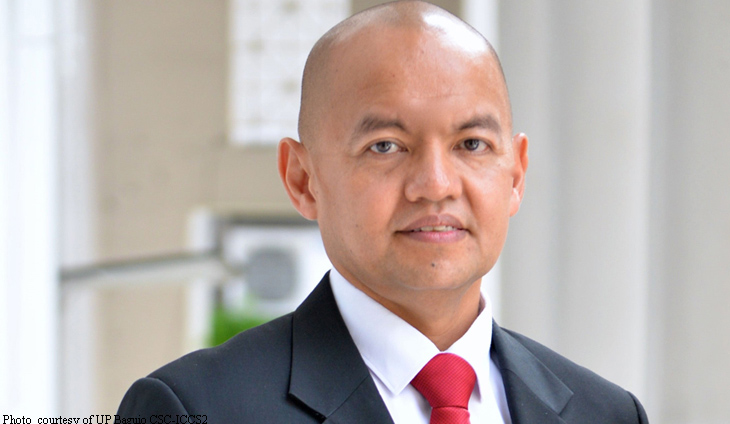 The Supreme Court (SC) has suspended Jonathan Cristobal, dean of an Isabela law school, from practicing law for three months for physically hurting his wife—finding disbarment to be “too harsh” because she provoked most of these violent events and showed poor behavior too.

Jonathan, dean of the Saint Ferdinand College College of Law, was found guilty of violating Rules 1.01 and 7.03 of the Code of Professional Responsibility (CPR) and was warned that a repetition of a similar offense “will warrant a more severe penalty.”

In a recent 16-page en banc decision, the SC said three of the six incidents reported by his wife Divine Grace was supported by substantial evidence.

The SC noted that Jonathan admitted that on January 30, 2005, he pushed Divine after losing composure, although he claimed to have been provoked by her repeated kicking to wake him up from his nap.

On May 15, 2009, Jonathan again pushed Divine during an argument about his alleged affair. This caused her to lose her balance and hit the gate, causing injuries to her head.

Jonathan also failed to refute that on December 11, 2009, he gave Divine a black eye.

The SC gave weight to the pictures of the injury, the police blotter and the medico-legal report. It also said that Divine’s execution of an affidavit of desistance, which caused the dismissal of the criminal case for violence against women, did not absolve Jonathan of administrative liability.

The SC did not believe Jonathan’s claim that it was an act of self-defense as he tried to block the blows from Divine. It noted that avoiding the blows was “completely different from directly punching the alleged assailant straight to the face.”

“It is more believable that he deliberately boxed Divine. What’s more, he admitted seeing Divine with an injury on her eye yet he did not even bother to attend to her wounds. To him, such fight was a normal quarrel between couples,” read the decision penned by Associate Justice Rosmari Carandang.

“Let it be stressed that physical violence is never a nonnal occurrence when couples argue. Violence is violence. To justify the same is egregious and goes against the very essence of a civilized society,” it added.

But, the SC said disbarment would be “too harsh a penalty given the attending circumstances in this case.”

It said that “a meticulous scrutiny of the evidence presented by both parties shows that most of the incidences complained of were caused by Divine’s provocation.”

Besides the kicking incident and the fits of jealousy, Divine suddenly demanded money and expressed displeasure about Jonathan’s payment of his mother’s utility bills. She also demanded to be fetched by Jonathan even though he had a prior engagement.

When Jonathan gave Divine a black eyed during a confrontation about his suspected affair,it was because she pulled his penis, punched his chest, slapped him, hit him with his belt and scratched his face. Divine never refuted these allegations.

The SC noted Jonathan’s claim that he had solely provided for their four children’s education and sustenance. When Divine left their house on December 9, 2009, she took their youngest son but Jonathan still gave monthly financial support.

The SC also said it “cannot turn a deaf ear” on Jonathan’s claim that Divine was “abrasive, boorish, insolent and disrespectful” towards him, his relatives, the household help, their children, the people tasked to renovate their house, and even the children’s teachers.

Jonathan’s mother Araceli claimed that Divine spoke ill of her, branded her as meddlesome, cursed her in front of construction workers, and wished her dead.

Sister Joyce claimed Divine would berate Jonathan in front of his notarial clients, badmouth and yell at him, neglect their children whenever she got angry with him, and once threatened him with a knife. Joyce also complained that Divine would shout at her and once threw pots and pans when she did not respond to her calls.

Jonathan’s cousin Antonio Apostol recounted that Divine once hurled an empty, opened tin can at him and was about to throw a knife when her son asked him to stop.

St. Ferdinand College’s elementary principal Jocelyn Claravall also narrated in an incident report that Divine punched the face of her son’s Grade 1 adviser during a closed-door meeting and called her “gaga” in front of the students.

Even though the SC highlighted Divine’s faults, it stressed that “Our act of reducing the administrative penalty due to Divine’s disrespect towards Atty. Cristobal is in no way a condonation or justification for Atty. Cristobal’s acts of violence toward Divine.”

“The consideration of these circumstances is only for the purpose of reducing the penalty imposed on Atty. Cristobal from disbarment to suspension,” read the decision.