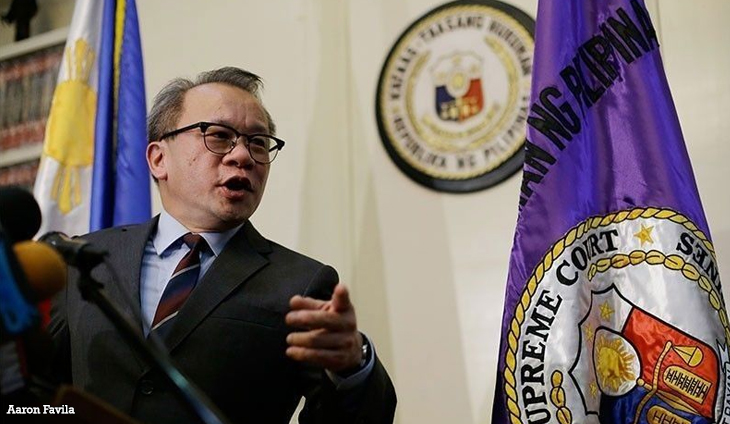 The Supreme Court on Monday has issued a cause order requiring Free Legal Assistance Group lawyer Theodore Te to explain his social media post shortly after last May 12 oral arguments on the Anti-Terrorism Act of 2020.

“The Court also resolved that a show cause order be issued to Attorney [Theodore] Te for his statement post-hearing last time, which was posted in the social media,” Chief Justice Alexander Gesmundo announced during the high court’s conclusion of the oral arguments proceeding.

Te is one of the petitioners under FLAG challenging the constitutionality of Republic Act No 11479.

In his now taken down post, Te said: “Perhaps the Court could have previewed the videos first for relevance and also for authenticity, and then made a determination if it should be played in open session with annotation. But it was also the uncontested annotation of the videos that was so grossly unfair and prejudicial. It amounted to direct examination testimony of a witness not placed under oath and not allowed to be cross-examined, ” Te said.

Te was referring to the government’s red-tagging spree which was allowed during oral arguments last May 12.

During his interpellation on May 12, National Security Adviser Hermogenes Esperon Jr., vice chairperson of the Anti-Terrorism Council, was allowed to red-tag progressive groups by playing two videos of Communist Party of the Philippines (CPP) founding chairman Jose Maria “Joma” Sison.

Esperon claimed this was proof that the long-established progressive groups are CPP “fronts.” The groups denied the claim, saying that Sison’s speech was merely an acknowledgement of groups involved in the democratic movement.

Esperon also disclosed that the ATC will reveal names of individuals whom the government designated as terrorists.

“There is a resolution of the Anti-Terrorism Council but until we have published this in local papers we will not name them publicly,” Esperon said while being interpellated by Associate Justice Rosmari Carandang.

On Thursday, the ATC, in two separate resolutions, has identified 29 ranking officials and members of the CPP, New People’s Army, and Islamic groups as terrorists under the controversial Anti-Terrorism Act of 2020.

Their designation as terrorists are contained in ATC Resolution Nos. 16 and 17 dated February 24, 2021 and April 17, 2021, respectively, and was signed Esperon.