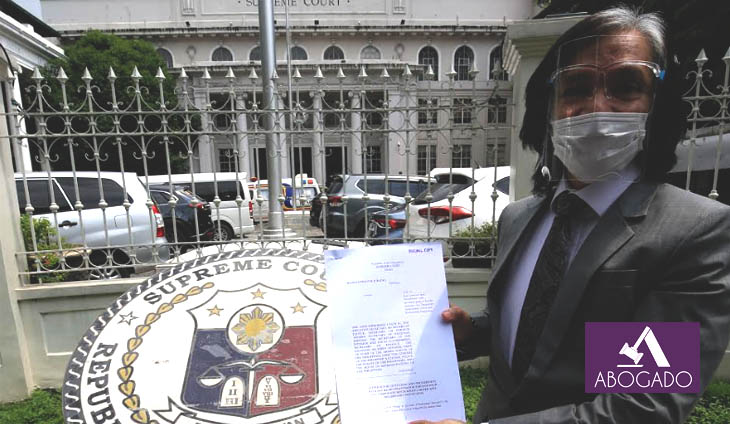 Former government corporate counsel Rudolf Philip Jurado on Wednesday joined the long line of petitioners questioning the constitutionality of the newly-signed Anti-Terrorism Act of 2020 before the Supreme Court.

In case you missed it, President Rodrigo Duterte fired Jurado for allegedly allowing the grant of franchise to the Aurora Pacific Economic Zone (Apeco).

According to Duterte, Jurado favoring Apeco was tantamount to the Office of the Government Corporate Counsel (OGCC) exercising the powers of the Philippine Amusement and Gaming Corporation (Pagcor).

“So you are just like Pagcor operating an independent entity with the same powers. You grant everything, kung hindi ka tarantado, ” the President was quoted to have said.

In his petition, Jurado asked the high court to declare as unconstitutional sections 4 and 29, which defined terrorism and allowed the detention of suspects for 24 days even without judicial warrant.

Jurado’s petition was the fifth to question the controversial legislation.

In the interim, the former government official asked the SC for the issuance of a temporary restraining order pending decision on the merits of his petition.

Also, Jurado questioned the manner printed copies of the then proposed law were distributed to congressmen, claiming the law provided that it should be done three days before it was passed.

Furthermore, he pointed out in his petition that the Constitution put a “qualified exception” on when the president may certify a bill’s immediate enactment.

Jurado claimed that the Constitution limits this power of the president to when there is a need “to meet a public calamity or emergency.”

In President Duterte’s letter to Speaker Alan Peter Cayetano, he certified the bill as urgent to “address an urgent need to strengthen the law on anti-terrorism.

But Mr. Duterte “does not even mention the words ‘public calamity’ or ’emergency’ as it was issued merely to ‘address an urgent need to strengthen the law on anti-terrorism” in his certification.

On Monday, Rep. Edcel Lagman, an opposition representative from Albay, filed a petition before the SC against the newly-signed legislation.

Calling the legislation as replete with constitutional infirmities, Lagman stressed that it must “be jettisoned in its entirety,” saying the derogation of freedom is not the price of security and peace, but the precursor of people’s unrest and righteous resistance.

Furthermore, Dean Mel Sta. Maria and several law professors from the Far Eastern University College of Law followed suit as they filed an 84-petition before the high court.

” Their implementation shall have a serious and dangerous chilling effect on
the citizens and other persons’ freedom of expression, speech and the press, as well as other important fundamental rights under the 1987 Constitution, such as but not limited to substantial and procedural due process, the right to privacy, freedom of association, and academic freedom, ” their petition reads in part.

Also, a group of lawyers and civic leaders formally filed the physical copy of their petition.

Also, the Makabayan bloc in Congress filed the fourth petition against the new Anti-Terrorism Act of 2020 urging the SC to void the entire legislation.

Led by House Deputy Minority Leader Carlos Zarate (Bayan Muna party-list), the Makabayan bloc, which is composed of progressive lawmakers in the House of Representatives, rejected the ‘vague’ definition of terrorism, which it stressed, would allow the government “unbridled discretion to select the targets of the new terror law.”

“With this vagueness, there will undeniably be instances where Filipinos will not know where social advocacy ends and ‘terrorism’ begins,” the group said.