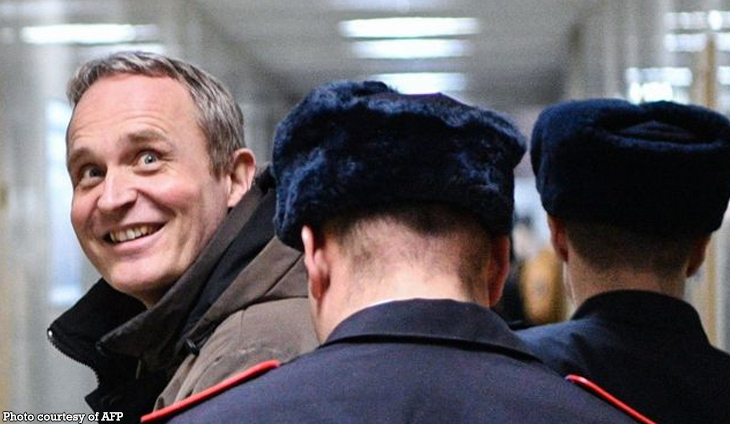 A Russian court sentenced a Jehovah’s Witness to six years in prison on Tuesday, as Moscow presses ahead with a crackdown on the religious movement.

Russia outlawed the Jehovah’s Witnesses in 2017, calling them an extremist organisation.

Sergei Klimov, 49, was convicted of being an organiser of an extremist group, said Olga Shevtsova, a spokeswoman for a district court in the western Siberian city of Tomsk.

It was the harshest penalty meted out by a Russian court against a Russian member of the religious movement so far.

A Danish Jehovah’s Witness was given a six-year term in February after being convicting of “extremism” — a case that drew international condemnation.

In September, a court in the western city of Saratov jailed six Jehovah’s Witnesses for terms ranging from two years to three-and-a-half years.

Klimov, who has been in detention since June last year, will face restrictions after his release including a year-long ban on travel outside Tomsk, a move reminiscent of Soviet-era treatment of political prisoners.

Yaroslav Sivulsky, a representative of the European Association of Jehovah’s Witnesses, said members of the religious movement were astounded by “the cruelty” of the punishment.

“A person is being punished for reading the Bible as if he killed someone,” Sivulsky told AFP. “It’s incredible.”

He drew parallels with the Soviet Union, saying his father — also a Jehovah’s Witness — was jailed for seven years under the Soviets.

– ‘Break anyone they can’t control’ –
Klimov’s lawyer Artur Leontyev said the defence would appeal, decrying the harshness of the sentence.

“They want to show that they can break anyone they cannot control,” he told AFP.

Moscow unleashed the crackdown even though President Vladimir Putin has said Jehovah’s Witnesses should not be seen as terrorists.

Putin’s spokesman Dmitry Peskov said on Tuesday the court ruling was in line with the current legislation on “these sects”, adding that there were no immediate plans to change the law.

Founded in the United States in the late 19th century, the movement has often faced problems over members proselytisation or refusing to respect state symbols such as flags.

There are some 175,000 Jehovah’s Witnesses in Russia, a predominantly Orthodox Christian country.

“They are simply locking up people for believing in God,” opposition leader Alexei Navalny said on Twitter.

“I’ve been saying for a long time that the Kremlin is full of devil-worshippers.”

Popular blogger StalinGulag said: “The Russian Orthodox Church is getting rid of competition.”