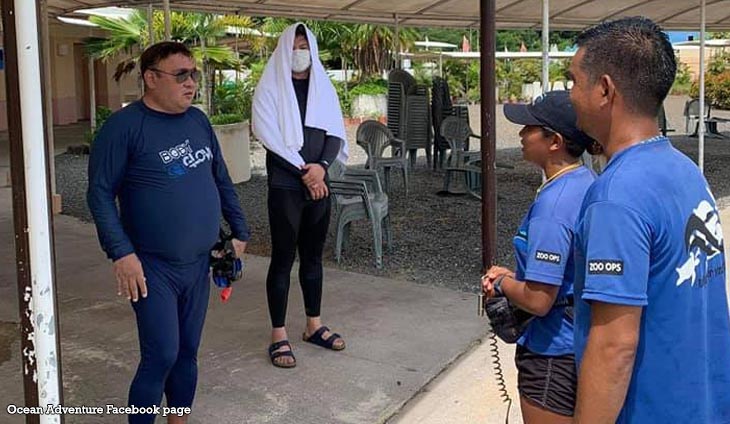 Roque went to Subic to check on near bankrupt food business: Side trip lang ‘yung dolphins!

Presidential Spokesperson Harry Roque on Thursday apologized after photos of him in the water with dolphins in Ocean Adventure in Subic, Zambales went viral, assuring that no quarantine protocols were violated.

Netizens earlier criticized Roque’s actions amid quarantine restrictions, especially since one of the photos showed him conversing with two people without wearing a face mask.

Roque assured that the incident would not happen again, hopeful that Metro Manila and other parts of the country would also transition to the least strict modified general community quarantine (MGCQ).

He, however, insisted that he did not violate any quarantine protocols because he is from the area and is also considered an authorized person outside residence (APOR) as he was permitted to travel due to his hog farm business.

He explained that he could not neglect his business because it was at the verge of going bankrupt, noting that Zambales had already transitioned into MGCQ last July 1.

According to Roque, he only decided to see the dolphins as a “side trip” after doing business there.

“It was not a trip intended for leisure. It was a side trip kumbaga, and I really intended na mga (to stay there for) one hour lang iyan, dahil alam ko limitadong oras (because I know time is limited),” he said.

Roque also said swimming, a non-contact sport, is allowed in areas under MGCQ.

Roque, meanwhile, explained that his job as presidential spokesperson gives him little time for taking vacations, which was why he took the opportunity to see the dolphins while doing business.