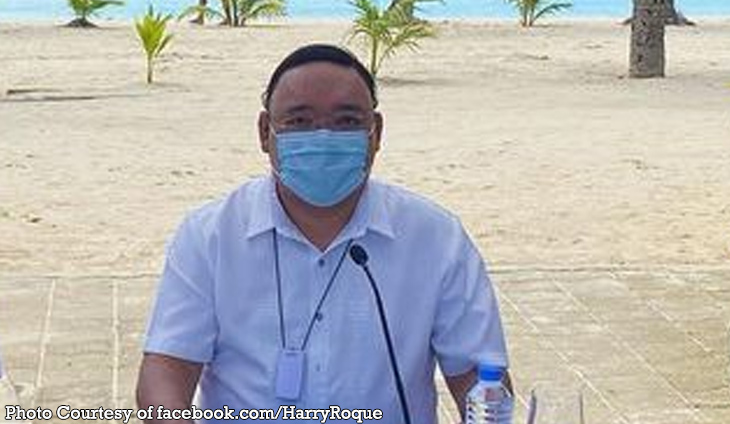 The National Union of People’s Lawyers on Tuesday joined the snowballing opposition on the nomination of presidential spokesperson Harry Roque to the International Law Commission (ILC) in New York, USA.

“Mr. Roque was a voluble and visible Filipino public interest lawyer who has regrettably transmogrified into a legal chameleon who uses legalspeak to spin reality and reinterprets many established legal notions and principles to suit official political narratives.”

“He has disingenuously justified and continues to justify to unbelievable lengths his principal President Duterte’s several questionable and even bizarre policies and pronouncements on the rule of law, due process, justice and international accountability, ” NUPL said in a statement.

According to the group, Roque “has publicly rationalized extrajudicial killings in the country’s War on Drugs, humored his principal’s misogynist remarks, enabled political repression including weaponization of the law, scowled against legitimate criticism and dissent, intimidated members of media, and berated and insulted health professionals critical of failed pandemic measures.”

Just the other day, the Defense of Human Rights and Dignity Movement (iDEFEND) has joined the Free Legal Assistance Group in opposing Roque’s bid.

” (Roque) lacks the moral and ethical integrity to work in such a prestigious global mechanism and demonstrates questionable qualifications and expertise as an international legal expert.”

“Moreover, his record of contemptuous pronouncements against concepts and principles of human rights as well as international treaties such as [UN Convention on the Law of the Sea] and the ICC (International Criminal Court) may stain the reputation of the ILC before the international community,” iDEFEND said in a petition.

In a letter signed by human rights lawyers led by Chel Diokno and Theodore Te, the FLAG pointed out that “Roque’s active political partisanship [in the Philippines] has demonstrated his contempt for the rule of law.”

“Mr. Roque does not possess the qualifications for a seat at the Commission. While he has degrees in law and has taught Public International Law, he is a political partisan who has actively demonstrated contempt for the rule of law and, with specific relevance to the Commission, has undermined the supremacy of human rights and international law,” the group said.

FLAG noted that membership to the ILC are” reserved to those persons of recognized competence in both doctrinal and practical aspects of international law.”

” His public defense of extrajudicial killings, his belittling of the competence and jurisdiction of the ICC, and his cavalier disregard of the effects of domestic violations of human rights, among others make him ill-suited for the work of the Commission,” FLAG said.

The group asked the ILC to disregard the nomination of Roque and remove him from consideration for a seat in the commission.

” These documented public pronouncements, as spokesperson of the current Philippine President, ill-befit one who seeks to become a member of the Commission. To be clear, membership in the Commission is reserved to those persons of recognized competence in both doctrinal and practical aspects of international law.”

” All these demonstrate a patent lack of integrity and character that make him utterly unworthy to even be seriously considered as part of the International Law Commission. He will bring no honor to the post he seeks, instead he will tarnish the same irreparably,” the group said.