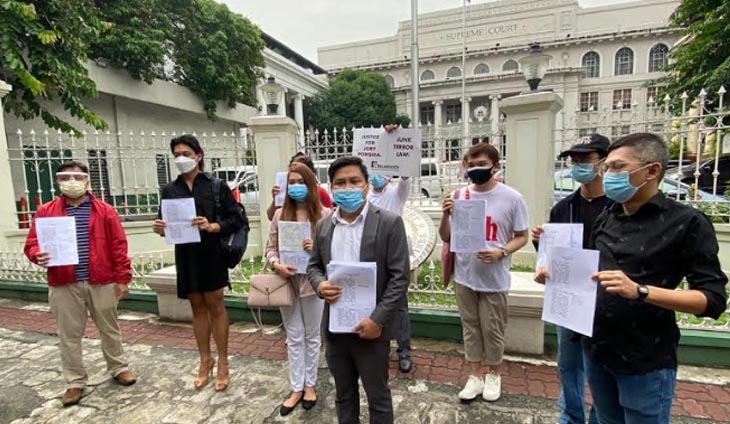 Now comes internet personalities who on Wednesday filed a petition before Supreme Court questioning the constitutionality of the Anti-Terrorism Act of 2020.

Calling themselves ‘Concerned Online Citizens, the ‘influencers’ asked the high bench to declare as null and void the newly-signed legislation.

In the interim, the group sought the issuance of a temporary restraining order pending decision on the merits, and the conduct of an oral argument.

The petition which the group filed was the 21st as of this writing.

They will be represented by San Sebastian College of Law Dean Rodel Taton before the high court.

“We are reminded that our rights, whether offline or online, should be protected. This case of the CONCERNED ONLINE CITIZENS touches on the vulnerability and susceptibility of online Filipinos mostly in social media to be victims of vague and broad definitions of terrorism or acts of terror. One can easily be tagged as terrorist or terrorist sympathizer, or terrorist enabler and anyone may be subjected to surveillance, attack and even to peddled fake and false news against their persons, ” Taton said.

“The Anti-Terrorism Act of 2020 perfectly fits as a weapon to terrorize Filipinos online into stopping debate, discussion and dissent as this centers on speech, of expression, and of the press. As a netizen myself, my constitutional rights to procedural and substantial due process will be violated, that is my fear too for our countrymen,” he continued.

On Tuesday, student leaders from Cebu filed the 20th petition against the hugely-controversial law.

In a 70-page petition, the leaders urged the high court to issue a temporary restraining order pending decision on the merits of the case.

They questioned the legality of several provisions of the newly-signed legislation specifically the definition of terrorism and warrantless arrest.#