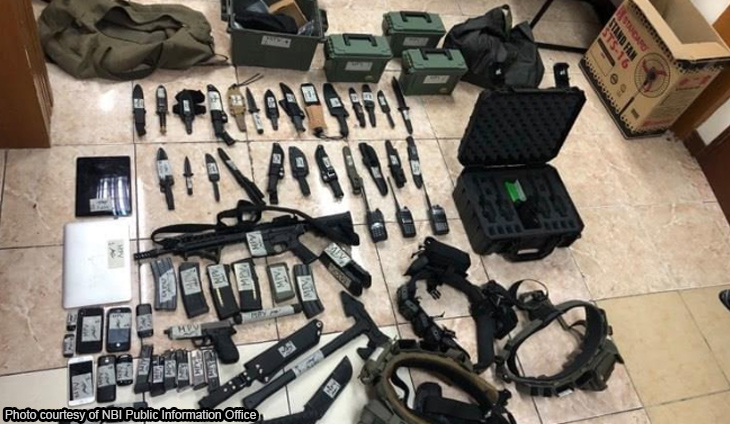 The National Bureau of Investigation (NBI) on Tuesday announced the arrest of an individual in Marikina City for illegal drugs and illegal possession of firearms.

The operation stemmed from a report received by NBI-International Operation Division (NBI-IOD) from the owner of a security firm on June 25, 2020, that his employees discovered in a condo unit two pieces of high powered firearms, live ammunitions, and white crystalline substance suspected to be shabu.

Earlier that day, a representative of the unit owner sought the assistance of the two security guards of the condominium to check on the tenant whom they known as “ALEX VERGARA” because the tenant has defaulted payment for two months.

After knocking several times and waiting for several hours, and with the permission of the unit owner, they forcibly opened the door.

They found Mr. Vergara lying on his bed, almost unconscious and weak. The security guards also saw an M16 rifle beside Vergara’s bed and a 9mm caliber automatic pistol with several loaded magazine lying around.

NBI-IOD operatives immediately proceeded to the area and inspected the unit. There they found crystalline like substance on several plastic sachets.

NBI-IOD then called the assistance of NBI-Task Force Against Illegal Drugs (NBI-TFAID) being the operational unit within the NBI mandated to investigate illegal drug related cases.

Based on the seized documents, the operatives discovered that subject Vergara is using three other aliases. Subject was placed under arrest and was brought to the NBI-Manila.

Subject was presented before the Office of the City Prosecutor of Marikina City for violation of Section 28 of R.A. 10591 (Comprehensive Firearms and Ammunition Regulation Act), Section 11 of R.A. 9165 (Comprehensive Dangerous Drugs Act of 2002), and Section 3 of Commonwealth Act No. 142, Regulating the Use of Alias.