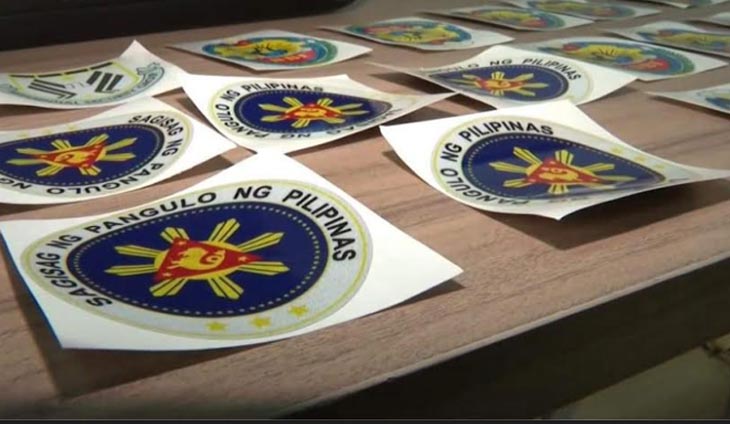 Operatives of NBI-Special Task Force (NBI-STF) have arrested an individual in Taguig City for illegal sale of stickers bearing the official seal of the Office of the President and other government agencies.

The operation stemmed from an information received by the NBI-STF regarding an individual who is selling stickers online the presidential seal, NBI seal, Bureau of Customs, and Philippine Coast Guard among others, using the name CARSTICKERS.PH, JAMMILKTEASUPY, and @leonc.cruziii.

The NBI-STF immediately conducted an investigation on the said merchants and a certain “Leon Cruz III”, residing in Bambang, Taguig City was revealed.

A poseur-buyer tried ordering from CARSTICKERS.PH via online selling platform to verify if the said merchant is selling stickers.

The order arrived confirming that the said merchant is a resident of 4C Mastrili St., Bambang, Taguig City.

Another order was made to @leonc.cruzIII and the same has a similar address. Surveillance on the said address as well as in social media confirmed the address of suspect Cruz.

NBI-STF then coordinated with the management of online selling platforms informing them of a possible conduct of law enforcement measures should the suspect continue selling government stickers.

On June 4, 2021, another order was placed by a poseur-customer. The seller immediately confirmed that the orders are readily available and can be delivered any time of the day.

With this, in coordination with the online selling platform and private courier service, an entrapment operation was hatched.

Operatives then proceeded to the address of the suspect and was placed under arrest.

Recovered from the suspect were (2) parcels containing five (5) seal of the Office of the President of the Philippines stickers and twenty four (24) NBI stickers.

Cruz was presented for inquest proceedings before the Office of the Prosecutor, Taguig City for violation of E.O. 141 s.1999 and is presently detained at the NBI Detention Center.