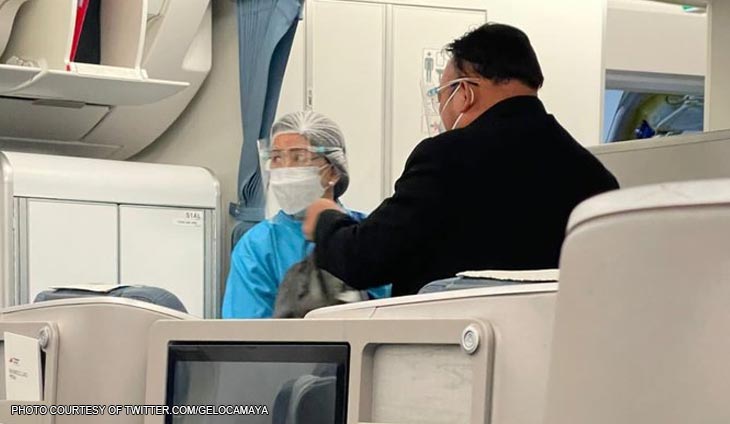 Reports said Roque was spotted on a Philippine Airlines flight with a business class seat as he is off to convince stakeholders to give him a seat at the International Law Commission (ILC), where he was nominated as part of the Asian delegation. That commission founded the International Criminal Court, which he has been bashing for probing President Rodrigo Duterte’s alleged crimes against humanity.

Here are supposed receipts to prove it. On Friday, he also had spotty connection that his briefing on the granular lockdown policy had been cut and reset twice.

“Harry Roque’s in New York City to personally campaign for his bid in the International Law Commission, founder of the ICC. There are 7 Asian seats for 12 candidates,” user @marvintomandao said, adding that among Roque’s claims to fame was that he was the president of his subdivision’s homeowners’ association. “His candidacy’s backed by the Phil. Mission to the UN.”

Harry Roque’s in New York City to personally campaign for his bid in the International Law Commission, founder of the ICC.
There are 7 Asian seats for 12 candidates.
In his CV, he put that he’s the White Plains HOA President.
His candidacy’s backed by the Phil. Mission to the UN. https://t.co/IWthfNwLS8

okay never mind, they said harry roque is in new york while his country is still suffering from the pandemic 🔪 https://t.co/OUCdXcRSZv

With this development, a fresh online petition has been raised against Roque joining the ILC, saying he had no right to be part of a prestigious body when he has enabled and defended a murderous administration.