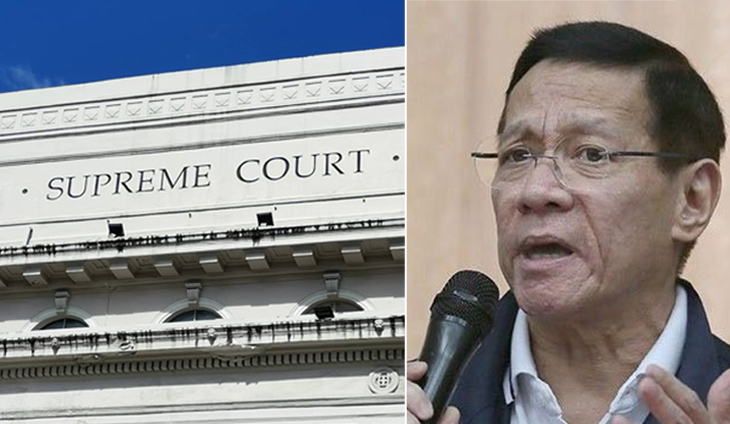 Siding with Health Secretary Francisco Duque III, the Supreme Court (SC) has slapped Manila Regional Trial Court (RTC) Branch 27 Judge Teresa Patrimonio-Soriaso with a P50,000 fine after he took issue with her preliminary injunction against the blacklisting of the contractor of the Barangay Health Stations project.

In a 9-page en banc decision on A.M. No. 20-08-05-SC, the SC unanimously found Judge Soriaso guilty of gross ignorance of the law and procedure and violation of Administrative Circular Number 7-99. On top of the fine, the SC warned her that a repetition of the same act “shall merit a more severe sanction from the Court.”

The case arose from Duque’s letter dated March 9, 2020, which meant he submitted the issue to the SC while coronavirus disease 2019 (COVID-19) cases were beginning to go out of control. The SC referred the matter to the Office of the Court Administrator (OCA) for investigation.

In its memorandum, the OCA noted that after JBros Construction Corporation was blacklisted on May 20, 2019 for alleged irregularities and failure to deliver on Phase II of the health stations project, it first filed a petition for certiorari before the Manila RTC.

However, Branch 12 Judge Renato Enciso on September 26, 2019 denied JBros’ plea for a writ of preliminary injunction to stop the blacklisting order from taking effect, since the acts sought to be prevented were already performed. JBros then withdrew the case and Judge Enciso dismissed it without prejudice on October 14, 2019.

JBros later refiled the case and called it a “Petition for Interim Measure of Protection in Aid of Arbitration Under the Alternative Dispute Resolution Act.” This time, Branch 27 Pairing Judge Lily Joy Labayo-Patria granted its plea for a 20-day “Temporary Restraining Order of Protection (TROP)” on December 19, 2019.

On January 20, 2020, Judge Soriaso issued a writ of preliminary injunction (WPI) and directed the Department of Health (DOH) to desist from implementing the termination of JBros’ contract, recall the blacklisting order, and submit a delisting order to the Government Procurement Policy Board (GPPB).

The OCA recommended that Judge Soriaso be held administratively liable for violating the doctrine of judicial stability, citing the fact that Judge Enciso previously denied the plea for a WPI and that JBros committed forum-shopping. Judge Soriaso, however, reasoned out that the two cases before her and Judge Enciso were different and did not preclude one another.

The SC, however, said Judge Soriaso could have been “more circumspect in the eventual issuance of the writ of preliminary injunction realizing the ruse propagated by JBros to get a favorable judgment.” It noted the confusion as to which order should be followed by the parties.

It stressed that even though the two cases filed by JBros were called by different names, they sought the same outcome, involved the same parties, and would need to be proved by the same evidence.

“The OCA is, therefore, correct in finding Judge Soriaso guilty of gross ignorance of the law for violating the rule on forum shopping and the doctrine of judicial stability,” read the decision penned by now-Chief Justice Alexander Gesmundo.

The SC also pointed out that because the contract between the DOH and JBros “had long been extinguished,” it “cannot be the source of any right to be protected by injunction.”

“An injunction would not lie where the acts sought to be enjoined had become fait accompli—an accomplished or consummated act. It is thus undeniable that Judge Soriaso erroneously issued the writ of preliminary injunction despite two glaring warning signs—signs she would have surely taken into consideration had she not taken a nonchalant attitude towards Judge Enciso’s earlier decision,” the SC concluded.

Duque had proven to be a political survivor, despite controversies left and right and alleged incompetence in the handling of the ever-worsening COVID-19 pandemic. President Rodrigo Duterte rejected calls for him to resign and expressed his “full trust” in him last September. #