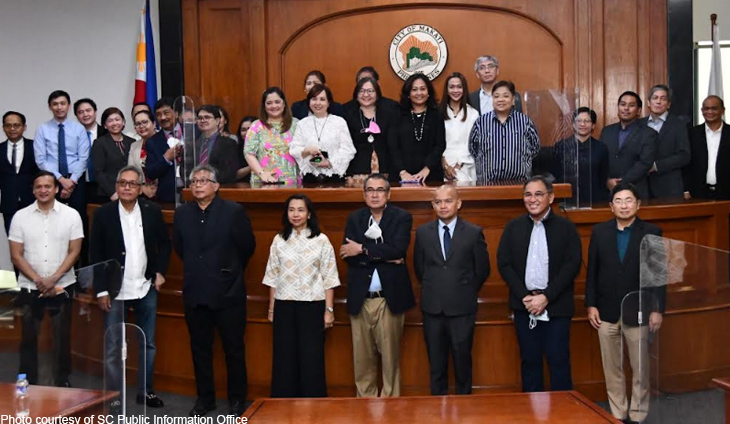 Chief Justice Alexander G. Gesmundo on Friday lauded judges of the first and second level courts of the City of Makati during the culmination of the Nationwide Judgment Week Program this morning.

“Thank you for consistently performing your duties and responsibilities as our frontliners,” Gesmundo said.

Gesmundo also encouraged judges to “always do your best” as he underscored that what they do and how they deal with the public will reflect on the judiciary.

He said: “As frontliners, you are the reflection of the Judiciary for those people who deal with the judicial system. So let us not frustrate our people that their first encounter with the Judiciary is not acceptable to them.”

Gesmundo reminded the judges of the virtues and qualities of a good judge: competence, integrity, probity, and independence.

“The strength of the Judiciary lies on you — the first and second level courts. You are the base of that pyramid and the strength of the pyramid lies on its base. If the base is weak then expect that those in the upper level will collapse,” said Gesmundo as he emphasized the importance of how those in the judiciary should stay united by working together and giving their best to serve the country and the Filipino people.

The Nationwide Judgment Week Program was conducted on the occasion of the 46th Anniversary of the OCA. Pursuant to OCA Circular No. 129-2021
issued on October 18, 2021, all judges of the first and second level courts were directed to immediately conduct an inventory of civil and criminal cases, especially those involving persons deprived of liberty, and set them for hearing from November 15 to 19, 2021, with the objective of terminating these cases pursuant to existing laws, rules, and guidelines.