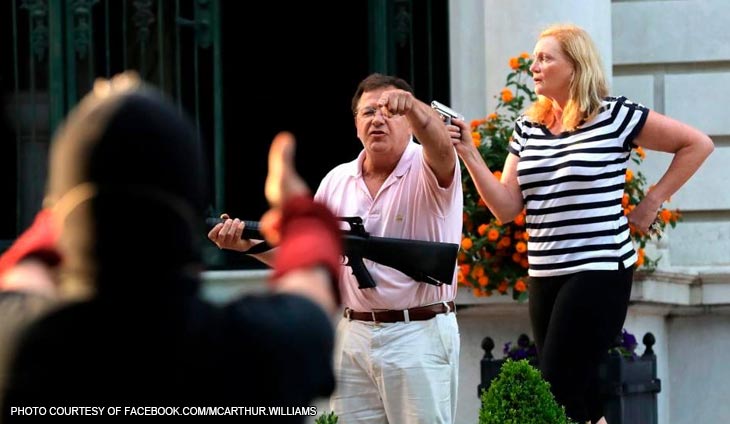 Fines for rich US lawyer couple who waved guns at protestors

Mark McCloskey, who ran across his lawn and threatened protestors with an assault rifle in the incident last year, was fined $750 for fourth degree assault, said Tom Gross, spokesman for the 22nd Circuit Court in St. Louis, Missouri.

His wife Patricia McCloskey was fined $2,000 for misdemeanor harassment after brandishing a handgun at the protestors.

Both had originally been charged with felony misuse of weapons after they were seen in video footage and photographs barefoot on their lawn in front of their palatial home, waving their guns and shouting as the peaceful protest march against police abuse and racism passed by on June 28, 2020.

There was no evidence that either had been threatened by the protestors.

The couple became a symbol of the gap between conservative white Americans and Blacks seeking justice.

But conservatives in the state defended their actions and the state’s governor, Mike Parson, declared he would pardon them if they were convicted.

“Make no mistake: No matter where you live, your family will not be safe in the radical Democrats’ America,” Patricia McCloskey said in a video the two made for the August Republican national convention that nominated Donald Trump for a second term as president.

In May Mark McCloskey announced he was running for one of Missouri’s seats in the US Senate.

In a campaign video he highlighted the incident, while exaggerating the threat the couple faced.

“When the angry mob came to destroy my house and kill my family, I took a stand against them,” he said. “I will never back down.” (AFP)