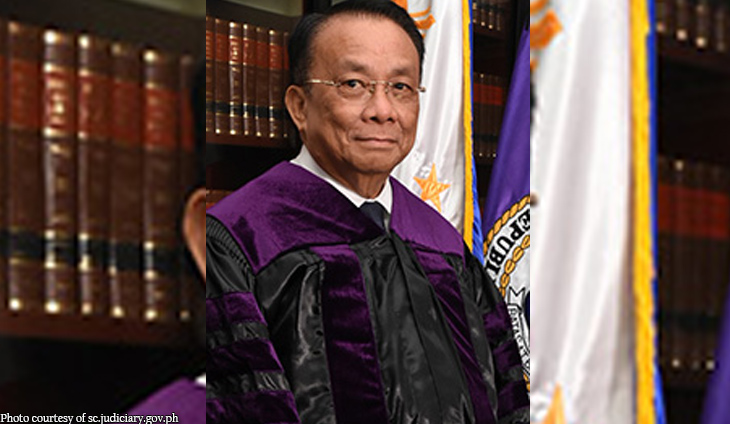 Ex-seminarian CJ Bersamin goes back to roots in Abra

PIDIGAN, Abra— Supreme Court Chief Justice Lucas Bersamin on Tuesday said the rigorous life he spent as a teenager inside the seminary contributed to his formation as a lawyer, as the highest official of the judicial branch and as a person.

“My life in the seminary, the work, schedules and the studies, particularly of Latin instilled in me the discipline I would have lacked but surely needed to ensure success in later life. In hindsight,” he said in speech before alumnus and seminarians at the St. Joseph seminary during the testimonial banquet given in his honor.

Bersamin belonged to the second batch of graduates of St. Francis minor seminary in Abra, where he spent four years of his life in preparation for his dream of becoming a priest.

He said the training given to them was a factor that led to his achievements as a University of the Philippines scholar and a graduate of law. He placed 9th place in the 1973 Bar Examinations.

“I might have had a different direction in my later years without my having entered the seminary,” he said.

Bersamin said four years in the seminary, he was molded to become matured and responsible equipped with life’s lessons.

The difficulty of learning the subject in Latin, while made him want to quit contributed a big part in his becoming a lawyer.

At a young age, living in the seminary away from his parents. he learned how to clean the toilet, wash his own clothes, do house chores as nobody else would do it for them. They were also made to help plant trees to reforest the mountain beside seminary, help harvest rice and corn, while being required to achieve high grades in the seminary.

“It became obvious in later years that our being required to join the harvest, was intended more to instill in us some life lessons in hard work. in fact, all the labor we did, the chores and others were really part of our training for a better future that none of us envision.”

He said while he was a lawyer, and later as a judge, Court of Appeals Justice until he was appointed as a Supreme Court associate justice in
2009, becoming the country’s highest official in the judiciary branch was never a dream but it was God’s will.

“Believe me when I say becoming the chief justice of the Philippines had not been in my dreams. I knew fully well there are others who have the ambition and better connected than I would ever be. That it would be a waste of time and effort to desire the post. I did not have the enthusiasm, I was only looking forward to a silent exit for my retirement in mid of October yet my name was submitted to the President. I left everything and let God decide on my fate,” he said.

“I had been asked many times what prepared me to achieve the pinnacle of my career– and it started in the seminary,” Bersamin said. (PNA)