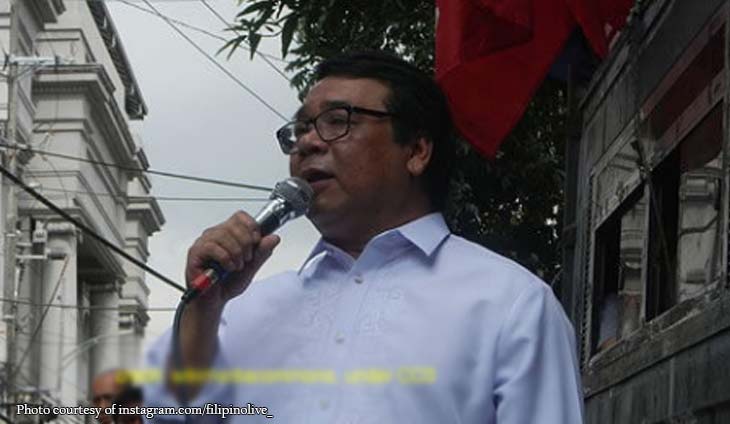 DOJ to start probe vs Colmenares for recruiting minors

The Department of Justice will formally start this Tuesday the preliminary investigation on the complaint filed by the Philippine National Police against former Bayan Muna party-list representative Neri Colmenares
Colmenares and his eight co-respondents following their alleged involvement in the recruitment of minors to join leftist movement.

This as Assistant State Prosecutor Christine Perolino has issued summons requiring them to appear on August 27, and submit their counter-affidavits.

In its complaint, the PNP accused the respondents of having violated the Republic Act 10364 (Anti-Trafficking in Persons Act of 2003), RA 11188 (Special Protection of Children in Situations of Armed Conflict and Providing Penalties for Violations thereof), RA 7610 (Special Protection of Children Against Child Abuse, Exploitation and Discrimination Act), RA 9851 (Philippine Act on Crimes Against International Humanitarian Law, Genocide, and Other Crimes Against Humanity), and kidnapping in violation of the Revised Penal Code (RPC).

In her sworn statement, 37-year-old mother Lucena Relissa claimed that her daughter Alicia Jasper was only a minor when she was recruited by Anakbayan after enrolling at the Far Eastern University (FEU) in Manila in July 2018.

“She (Alicia) left her home several times without informing her mother where she will be going, and will just suddenly appear at home after several days,” read the PNP complaint.

“On March 10, 2019 she again left their home leaving a letter to her mother containing strong messages against her mother and her policy at home especially her mother’s contradiction to her desires,” it added.

Previously, the NUPL accused the PNP of concocting lies and charges for filing the complaint against Colmenares.

In a statement, group president Edre Olalia described as totally absurd the complaint filed by the PNP.

“Not all scripts of comical persons in authority are funny,” Olalia said in a statement.

“How in heaven’s name could someone like Neri be even remotely involved, connected or liable for such inane and contrived charges that have been debunked?” Olalia asked.

The NUPL head expressed belief that the charges filed against Colmenares and other respondents was just part of the Duterte administration’s efforts to get back against its critics.

“Make no mistake about it: they are lining and rounding up the most voluble and visible people who stand in the way and who fight back against repression and injustice,” Olalia stated.

“It is indubitably part of the legal blitzkrieg and assault against legitimate dissent and those who push back and stand their ground,” he continued.