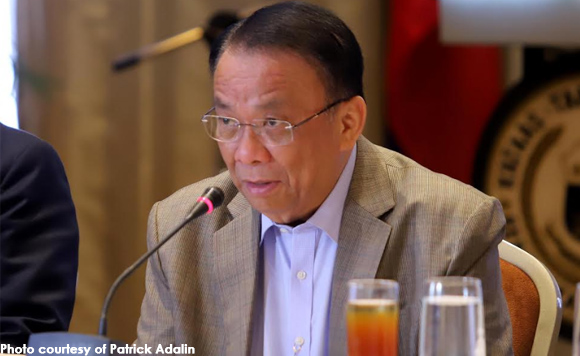 Retiring Chief Justice Lucas Bersamin on Monday finally broke his silence on two United States senators’ call to bar the entry on American soil of any Philippine official who had a hand in Sen. Leila de Lima’s “politically motivated” imprisonment.

Interviewed over CNN Philippines’ The Source, Bersamin described the American legislators’ initiative as “act of interference.”

“That’s obviously a PR tour de force. If they do implement that to ban officials whom they believe are responsible for the continuing incarceration of Senator De Lima it’s their privilege and I think nothing we can do about that, but the nature of that kind of action is interference,” Bersamin said.

Currently, de Lima is detained at the Philippine National Police Custodial Center in Camp Crame on charges linking her to illegal drugs during her stint as then justice secretary

The US Senate Appropriations Committee approved an amendment to a bill seeking to deny entry to Filipino behind de Lima’s detention.

Senators Dick Durbin and Patrick Leahy initiated the amendment. The amendment formed part of an appropriations bill on state and foreign operations, which will be tackled further by the entire US Senate and the US Congress

But Bersamin said he would not allow foreing interference on the country’s handling of de Lima’s cases, saying courts in the Philippines are fully functioning.

“I was discharging a judicial function, she came to the court and ask for relief and we considered the plea we debated it. Of course, she should not expect that all of us will agree one way or the other. I happened to take the side against her because I am not convinced that we should deprive the trial court to have jurisdiction against her,” he continued.#