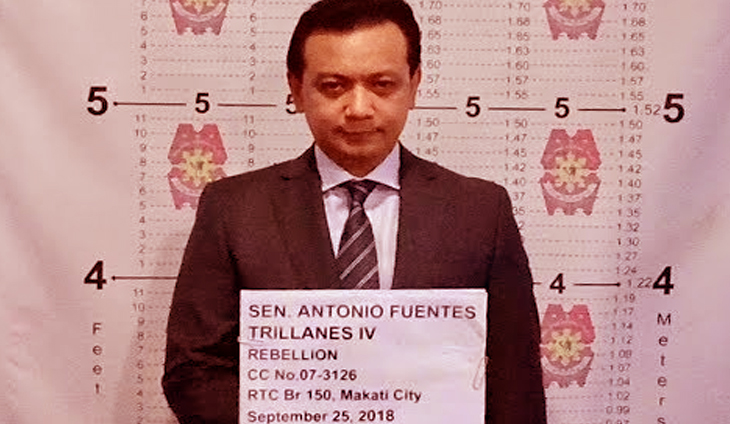 CA keeps Trillanes out of jail, says Duterte could scrap amnesty if he proved non-filing of application

Former Senator Antonio Trillanes IV will remain a free man after the Court of Appeals (CA) upheld a Makati City judge’s finding that he validly filed an application for amnesty to be spared from a coup d’etat case—although it ruled that it would not have been unconstitutional for President Rodrigo Duterte to revoke the amnesty of his critic if he got his facts right.

In a 67-page decision on CA-G.R. SP No. 159217, the CA Special 11th Division dismissed the government’s petition and sustained the October 22, 2018 and November 22, 2018 orders of Makati City Regional Trial Court (RTC) Branch 148 Judge Andres Bartolome Soriano in favor of Trillanes.

The CA held that state prosecutors failed to prove their allegation that Trillanes did not file his application for amnesty and admit his guilt in connection with the July 27, 2003 Oakwood mutiny. It stressed that “mere allegation is not evidence and is not equivalent to proof.”

Prosecutors claimed that because Trillanes’s application was missing from the records of the Department of National Defense or the Ad Hoc Amnesty Committee, it must mean that he did not file anything.

But, their own witness, GMA News Online news editor Mark Merueñas, confirmed the veracity of his picture of Trillanes holding his amnesty application and testified that he personally saw him taking his oath before ad hoc committee chairperson Colonel Josefa Berbigal.

“The Court holds that the fact of [Trillanes’s] actual filing of his application for amnesty is duly established in this case per the judicious factual findings of [Judge Soriano],” read the decision penned by Associate Justice Edwin Sorongon.

This was supported by Trillanes’s inclusion in the list of applicants executed by Col. Berbigal and by a committee resolution that acknowledged his application.

The CA further noted that the pre-printed statement and oath contained a general admission of guilt, which was sufficient evidence that Trillanes complied with the requirement.

Even though Trillanes could no longer present his copy of his application form, the CA faulted the government for failing to maintain its records and letting seven years pass by before go after him.

“Lamentable as it is, since this entire controversy is anchored on the purported inexistence of this application form, it would be certainly unfair, however, if private respondent or any other applicant-grantee for that matter would be allowed to suffer the consequences of the negligence or inefficiency of said public officer or office,” read the decision.

The CA also questioned the government’s logic that Trillanes’s amnesty was processed by a DND committee and was therefore a usurpation of the President’s power to grant amnesty.

It noted that the government cannot accuse Trillanes of failing to comply with the requirements of President Benigno Simeon Aquino III’s Proclamation number 75 and at the same time claim that the proclamation delegating the grant of amnesty was invalid to begin with.

“This Court cannot comprehend the mental calisthenics entailed by the janus-faced position petitioner assumed in this case. Why would it invoke the provisions of a proclamation which it would later on claim to be invalid due to being unconstitutional?” read the decision.

These findings meant that the September 21, 2011 order of the RTC dismissing the coup d’etat case was not void due to Trillanes’s compliance with the requirements of conditional amnesty. The CA stressed that the judgment was already final and could no longer be disturbed by the Duterte administration’s renewed push to punish his critic.

It stressed that “nothing in the 1987 Constitution which prohibits the President to revoke the grant of a conditional amnesty, if he finds that the grantee failed to comply with the conditions thereof.”

It added that Duterte’s proclamation did not declare Aquino’s proclamation null and void and was thus not an unconstitutional exercise of judicial power.

The CA ruled that Duterte validly exercised his power of control over the executive branch of government, because his proclamation revoking Trillanes’s amnesty may be seen as an act of correcting his erroneous inclusion by the DND ad hoc committee as among those qualified for amnesty.

It also held that there was no violation of Trillanes’s right to due process because the proclamation directed law enforcers to “employ all lawful means” to apprehend him—precisely why authorities had to return to the Makati City courts to seek the revival of his terminated coup d’etat and rebellion charges.

The CA added that Trillanes’s right against double jeopardy was not violated because the previous dismissal of the cases was done with his express consent.

Likewise, the CA held that his right to equal protection of the laws was not violated. Contrary to his claim that he was singled out by Duterte, the CA said it just so happened that he was thought to have failed to file a valid application for amnesty.

But, again, the CA stressed: “Notwithstanding this Court’s finding that an alleged noncompliance with the conditions attached to Proclamation No. 75 is a valid ground to review the grant of conditional amnesty, such non-compliance must be proven before the amnesty may be validly revoked. In other words, there must be a factual basis for the nullification or revocation of a conditional amnesty.”