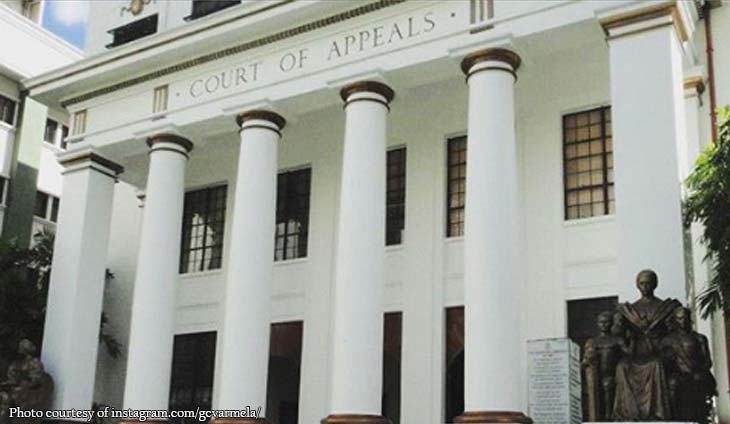 CA: Ex-Dasmariñas vice-mayor, cohorts not eligible for parole over kidnap-slay of brother-in-law

The Court of Appeals (CA) has meted out a 40-year sentence against former Dasmariñas City, Cavite, Vice-Mayor Victor Carungcong and three cohorts for the kidnapping and murder of his brother-in-law and the lattter’s driver in June 2008. It also upgraded the penalty by declaring them ineligible for parole.

All four convicts were ordered to pay a total of P725,670.57 to the heirs of Carungcong’s brother-in-law, businessman and retired pilot Demosthenes Cañete. The award consists of P100,000 each in civil indemnity, actual damages and exemplary damages, and P425,670.57 in burial expenses.

They were likewise ordered to pay a total of P300,000 to the heirs of driver Allan Garay (P100,000 each in civil indemnity, actual damages and exemplary damages).

The CA Special 14th Division modified the sentence handed down by the Pasay City Regional Trial Court (RTC) Branch 117 in its July 1, 2016 verdict, which imposed an indeterminate penalty of a minimum of 20 years and 1 day to a maximum of 40 years and did not declare the accused ineligible for parole.

In a recent 46-page decision, the appellate court said the trial court’s sentence was erroneous because Congress did not intend to alter the classification of reclusion perpetua as an indivisible penalty when it fixed its duration under Section 17 of Republic Act (RA) Number 7659.

The CA also pointed out that the crime was so heinous, it would have been punishable by the death penalty had RA 9346 not prohibited its imposition in 2006.

It sustained the trial court’s findings that the accused demanded P20 million for the release of Cañete and Garay, following their abduction in Sabang, Dasmariñas City. After accepting P973,000, they ended up killing the two victims anyway; their bodies were found in Porac, Pampanga, and in Valenzuela City, respectively.

Suspect Police Officer 1 (PO1) turned state witness and pointed to Carungcong and Cautiver as the masterminds behind the plot.

The CA said the records supported “the inescapable conclusion that the prosecution’s evidence, albeit circumstantial, is of a sufficient quantum to establish the guilt of appellants Exequiel, Mariano, Victor, and Alejandrito in the commission of the crime.”

“Their community of criminal design can be inferred from the planning stage, as well as the actual execution of their clearly designated roles, to wit: the mastermind of the crime is Victor; the ransom taker is Alejandrito; and the ones who gave the instructions and coordinated with the other accused are Exequiel and Mariano,” read the decision penned by Associate Justice Elihu Ybañez.

On the other hand, the CA acquitted Cautiver’s wife PCI Penelope Cautive and ordered her release from the the Correctional Institution for Women (CIW) in Mandaluyong City, where she had begun serving the sentence imposed by the RTC.

The CA said her participation was “not adequately proved with moral certainty,” and there was no evidence that she had conspired with the accused or participated in carrying out the crime.