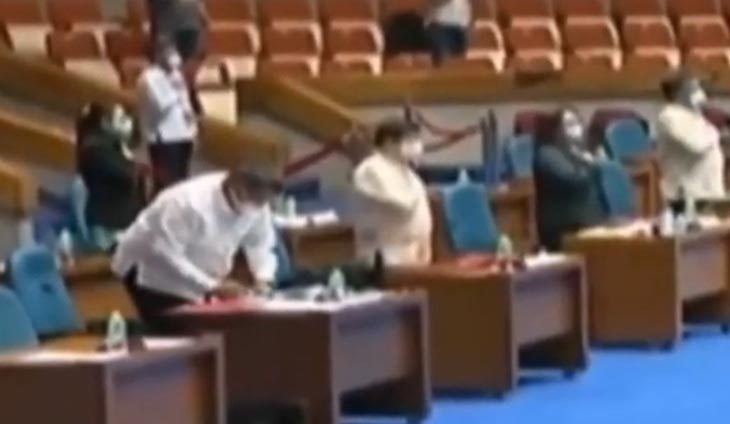 A viral video of Representative Boying Remulla writing down a note while the national anthem plays in the background is making its rounds online. The congressman is being called out for the blatant disrespect to “Lupang Hinirang” which violates several laws.

Remulla has since apologized for his behavior but quickly pointed the finger at “ABS-CBN people” who he believes spread the video.

Abogado Erin Tañada refused to let him point fingers. The abogado said that what he did just proved his disregard for the flag and the national anthem is his personal choice and no one’s fault but his own.

Cong Boying, there is no one to blame but yourself. Don’t point your finger at anyone because it will not erase the fact that you did not respect our Flag and National Anthem. https://t.co/YkoJeluyvi

Filipino author Jerry Gracio also asked if he can be held accountable for his actions. The abogado said that he violated the Flag & Heraldic Code of the Philippines and must be penalized under the law unless he’s exempted.

Did Congressman Remulla violated RA 8491 or the Flag & Heraldic Code of the Philippines? Sapat na ba ang sorry? The law may be harsh but it is the law, di ba? O, echos lang ang law is the law? https://t.co/wXwvc1n1LY

Abogado Marky Tagala said that Remulla must be punished for his actions as to not promote double standards or special treatment . The abogado noted that Lupang Hinirang should be respected from its first and last note. He added that if ordinary people can be penalized quickly, the congressman should be too for not respecting the national anthem.

If authorities were quick to penalize ordinary men for desecrating the National Anthem (in movie houses, schools, etc.), authorities should also be quick to punish Cong. Remulla for doing the same. The law is clear: Lupang Hinirang should be respected from its first to last note. https://t.co/WAluazuU64