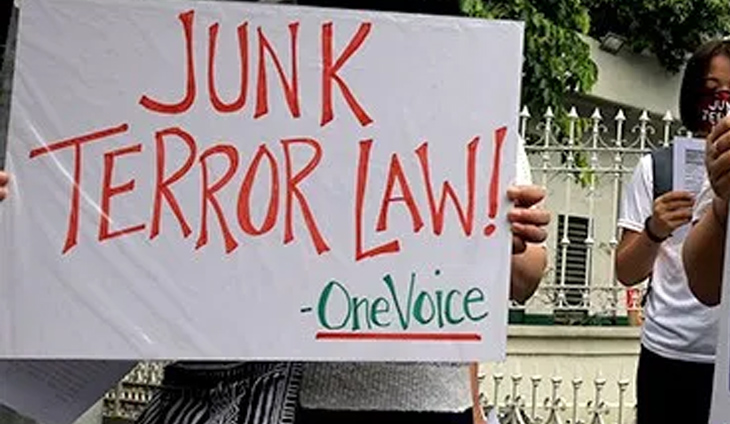 Another petition vs new anti-terror law filed before SC

Another petition was filed before the Supreme Court challenging the constitutionality of the controversial Anti-Terrorism Act of 2020.

They collectively expressed that the new law is reminiscent of the dictatorship of former president Marcos, thus choosing date for petition-filing was also a protest against moves to mark September 11 as a holiday.

The petitioners belonging to the United Against Torture Coalition (UATC)-Philippines, a network composed of various human rights groups and individuals working on torture prevention in the Philippines, said that the Anti-Terror Act (ATA) directly contravened RA 9745 or the Anti-Torture Law of 2009 that criminalizes acts of torture and ill-treatment.

In its petition for certiorari, the group argued that many of the main provisions of the ATA are contrary to the provisions of the 1987 Constitution and the anti-torture law, particularly those that value the dignity of every human person and guarantee full respect for human rights of all persons, including suspects, detainees and prisoners.

The group argued that under Section 29 of the anti-terrorism act, suspected terrorists may be detained for up to 14 days, extendible for another 10 days before they have to be charged in court- a condition that is conducive to the person detained for being tortured or coerced into involuntary confession, forcibly made to disappear or even summarily executed which the anti-torture law aims to prevent.

The petitioners have pointed out that this period is much longer than the three-day detention period allowed by the Constitution when the privilege of the writ of habeas corpus is suspended.

“Given the dismal human rights record of the Duterte government and its misogynistic acts, the implementation of the ATA will have a chilling effect to every woman, especially the most vulnerable among us such as the prostituted women who have experienced acts of torture in the hands of authorities,” said Jean Enriquez, Executive Director of Coalition Against Trafficking in Women- Asia Pacific (CATW-AP) and co-petitioner.

The petitioners warned that the new ATA poses a threat to the legitimate work of human rights defenders.

Task Force Detainees of the Philippines (TFDP), co-petitioner also said that the Anti-Terrorism Council (ATC) under Section 25 of RA 11479 provides unbridled discretion in enforcing the law. TFDP feared that the ATA will only institutionalize the government’s repressive and discriminatory measures, which is to “weaponize the law to suppress fundamental freedoms.”

One of the petitioners, Edeliza Hernandez, Executive Director of Medical Action Group (MAG), said that the ATA will undermine and even discredit the work of service providers, humanitarian workers and healthcare professionals who provide medical services and treat wounded suspects or alleged terrorists as they can be interpreted as providing “material support for terrorism.” “We must ensure everyone from ambulance drivers to doctors can work without fear of prosecution or sanction,” she added.