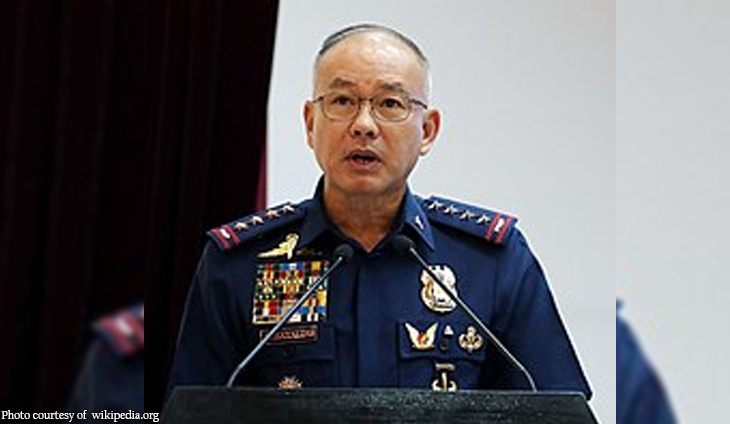 CEBU CITY – The chief of the Philippine National Police (PNP) on Thursday presented to the media a 43-year-old man who confessed to killing teenager Christine Lee Silawan in a “Momo challenge” way while he was under the influence of illegal drugs.

PNP chief, General Oscar Albayalde, praised the police for the arrest of Renato Payupan Llenes alias “Renren” in the afternoon of April 9 along Bangkal Road, Barangay Bangkal, Lapu-Lapu City for carrying an unlicensed pistol during the election gun ban.

The police confiscated from Llenes a .45-caliber pistol and a magazine loaded with six live ammunition.

Albayalde said Llenes, who has a live-in-partner and five children, used a pair of scissors in stabbing Silawan and in scraping off her face. The suspect said he saw a “Momo challenge” way of killing and did it on the 16-year-old girl.

Albayalde said Llenes executed an extra-judicial confession on the same day he was arrested at the LCPO and “voluntarily narrated his involvement in the killing of Silawan.” The PNP chief said the suspect did the confession because “he was haunted by his conscience”.

Albayalde said Llenes introduced himself to Silawan on Facebook using a dummy account by the name “CJ Diaz” and invited her to become his friend, which the victim accepted.

The suspect told the media that on March 10, he asked Silawan to meet him at the Sacred Heart of Jesus Parish church in Barangay Pajac.

The victim, however, was shocked to see that he “was too old for her” and they quarreled.

Llenes later on led Silawan to a vacant lot near a subdivision in Barangay Bangkal while talking to each other.

The suspect said he became angry when Silawan told him she had a boyfriend, and he stabbed her using a pair of scissors. He then flayed the skin off her face “aron dili mailhan (so that she could not be identified).”

Llenes admitted he has been addicted to drugs and that he was under its influence when he killed the victim.

Albayalde said Llenes was assisted by two lawyers – a private attorney and a member of the Public Attorney’s Office (PAO), when he executed his out-of-court confession.

Lawyer Manuel Degolacion, one of the assisting counsels, said he convinced Llenes to retract and withdraw his statements in the extra-judicial confession. “But he insisted that out of conscience he wants to pursue it,” he said.

Llenes asked for forgiveness from Silawan’s parents, who were present during the press briefing at the Police Regional Office-7 where he was presented to the media.

Llenes also asked authorities to release the 17-year-old boyfriend of Silawan, who was arrested by the police last March 18. “Gusto ko mogawas to siya kay wa to siyay labot luoy kaayo sa ngatanan (I want him out already, he has nothing to do with the crime, I pity him).”

Albayalde said the police would still coordinate with the National Bureau of Investigation in Region 7 (NBI-7), as some of the pieces of evidence, such as the victim’s cellphone, is still in its custody.

The police, he said, will send the bloodstained scissors and a t-shirt to the PNP Crime Laboratory in the region for processing.

Albayalde said they will file a separate case concerning the confession of Llenes, adding “it’s up to the court to decide on the case of the 17-year old boy” who is still under the custody of the local social welfare office of Lapu-Lapu City. (PNA)