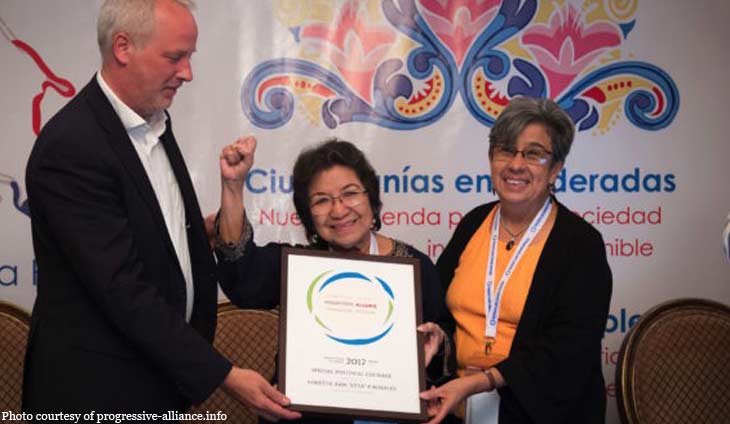 The group cited Rosales’ contribution in the campaign for human rights in the Philippines as a teacher activist and organizer during the Marcos dictatorship.

They also noted her social contribution as Akbayan representative from 1998-2007 where she championed bills on human rights compensation, anti-discrimination and electoral reforms.

She was the first recipient of the award.

Rosales has been described by the group as “one of the staunchest critics against President Rodrigo Duterte’s bloody war on drugs”. Rosales is currently Akbayan Chairperson Emeritus.

Receving the award before a ceremony in Costa Rica, Rosales said: “This tribute from the Progressive Alliance humbles us deeply. And much as we are humbled, we are honored and most pleasantly surprised.”

“This recognition gives us hope and courage as we continue to defend our shared visions for greater equality without discrimination, for human dignity, gender justice and human rights, for freedom and solidarity among our peoples and those of the world.”

“Things get better when an informed and empowered citizenry rises up to defend its rights that are being trampled upon and the democratic institutions it restored from the ouster of dictatorial rule,” Etta Rosales said in her speech.

The Progressive Alliance award is given to “people or organisations who have been committed in an exemplary way to a more peaceful and fair world”.